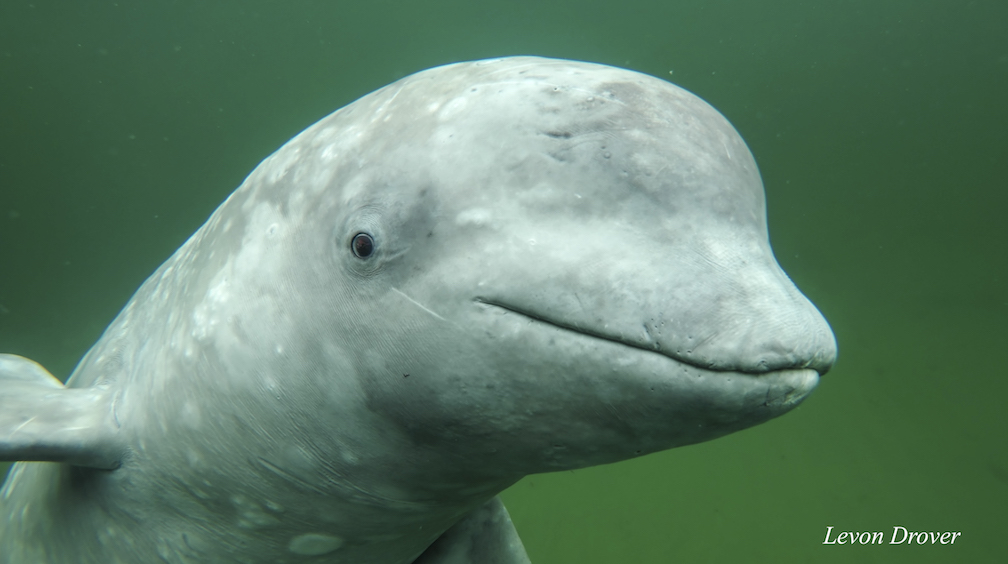 Great news! The beluga that was trapped in the Nepisiguit River in New Brunswick and relocated to the St. Lawrence Estuary on June 15, 2017, has been resighted! During this unprecedented operation, the animal was captured and flown to Rivière-du-Loup before being subsequently released into the waters of the St. Lawrence near Cacouna. The St. Lawrence beluga population is endangered. The operation aimed to determine the feasibility and challenges of such a relocation operation, as well as to assess the chances of success for a solitary young beluga to reintegrate a social group over the long term and contribute to the recovery of the population.

“According to the images that have been transmitted to us, the Nepisiguit beluga appears to be in good health. He appears vigorous and is swimming well,” confirms veterinarian specialist Dr. Stéphane Lair of the Université de Montréal’s Faculty of Veterinary Medicine.

The team was surprised, however, that the animal was resighted far from its release site in the summer range of the St. Lawrence beluga. On July 14, the rescued beluga was identified in Ingonish, off Cape Breton, Nova Scotia, by Catherine Kinsman of the Whale Stewardship Project: ” I was called to give atalk in the community about two vagrant belugas. While watching videos of them, I kept looking at the gray beluga’s skin and a scar pattern I was sure I’d seen before. Then photos of the Nepisiguit beluga matched! I was so excited to identify him.”He is in the company of another unidentified male beluga.

“We suspected that the animal survived and we can now confirm this. This raises some questions, however, about whether this animal will ever contribute to the recovery of the St. Lawrence beluga”says Véronique Lesage, Research Scientist and beluga specialist with Fisheries and Oceans Canada.

Authorities and researchers are concerned about the welfare of these isolated belugas given the degree of interaction they have with humans. “We often get vagrant animals such as these in areas outside the St. Lawrence Estuary and they can become a source of fascination for the public,” says Tonya Wimmer, Executive Director of the Marine Animal Response Society (MARS). “It is important that people maintain a safe distance, which the new federal marine mammal regulations dictate must be at least 100 m.” The two belugas off Ingonish are being closely monitored by Fisheries and Oceans Canada fishery officers.

The adventure of the Nepisiguit beluga is therefore not over. “We had to wait a long time to hear from the Nepisiguit beluga and we would have preferred that he stay with other belugas in the St. Lawrence Estuary. We will try to gather more information on this vagrant individual to understand why the animal has moved away from the St. Lawrence Estuary, and whether or not it will eventually return to this location,” says Robert Michaud, Scientific Director of the Group for Research and Education on Marine Mammals (GREMM) and coordinator of the relocation operation.

The public is reminded that it is illegal to approach within 100 m of these animals and to attempt to feed them or swim or otherwise interact with them. “The best chance for these animals to return to their fellow belugas is if we minimize our interactions with them,” adds Michaud.

On June 2, 2017, the Marine Animal Response Society (MARS) received a report of a beluga swimming up the Nepisiguit River near Bathurst, New Brunswick. The whale was not inclined to leave the river and its health was failing. Since the St. Lawrence beluga population is classified as “endangered” and has been declining considerably since the early 2000s, the survival of a single individual could have an influence on the population’s recovery. Based on consultations between MARS, GREMM, Fisheries and Oceans Canada, and veterinarians from the Université de Montréal, the Vancouver Aquarium and the John G. Shedd Aquarium in Chicago, it was decided that the animal should be captured and relocated back to the St. Lawrence Estuary to determine whether it is possible to reintegrate a vagrant beluga with its natal population.

On June 15, the beluga was captured in the river and transported to the Bathurst airport, from where it was flown to Rivière-du-Loup (during which time it was rehydrated) and taken to the port of Gros-Cacouna, where it was placed on a small vessel and released into the water near a group of belugas in the St. Lawrence Estuary. A tag attached to the animal’s back transmitted satellite positions for 19 days following its release. The last time a signal was received from the Nepisiguit River beluga was on July 4.