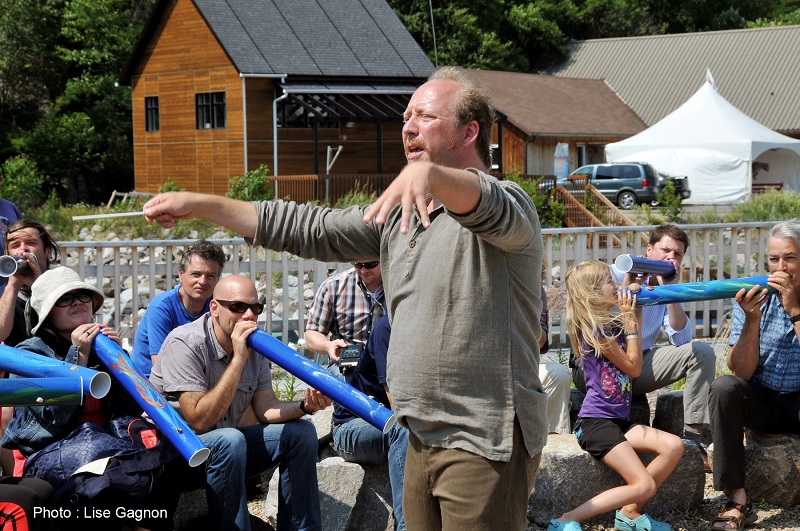 The GREMM team is deeply saddened to have learned of the death of storyteller Simon Gauthier. This artist and poet from Sept-Îles was a virtuoso when it came to creating plays on words and moving stories.

The Marine Mammal Interpretation Centre had the chance to serve as a venue for his acts every year since the beginning of his career. For more than twenty years, he presented many tales here, including Corne de brume, a show featuring stories inspired by whales. Funny, touching, moving and thought-provoking, Simon’s stories always had their own unique flavour. His performances were often sold out. He was also the designer of the famous “baleinophone,” a musical instrument that mimics singing whales, as well as the co-creator of CIMM’s flagship activity: whale song lessons.

Simon was an artistic pillar in the region. In 2001, he was proud to have been named Côte-Nord Ambassador by Tourisme Côte-Nord and, in 2002, he received the Côte-Nord Author of the Year distinction at the Montréal book fair. In addition, he founded the Tadoussac storytelling festival (Les conteurs en rafale) and played an important role in promoting Québécois stories in schools in the province’s Côte-Nord region. He was a unifier and regularly involved his fellow storytellers in his own projects.

He traveled extensively in the French-speaking world and his work touched the hearts of many during his tours in Belgium, Switzerland, the Netherlands, Tunisia, and Burkina Faso. But even after achieving success on the international stage, he always returned to Tadoussac. All those who met him were forever marked by this unforgettable individual.