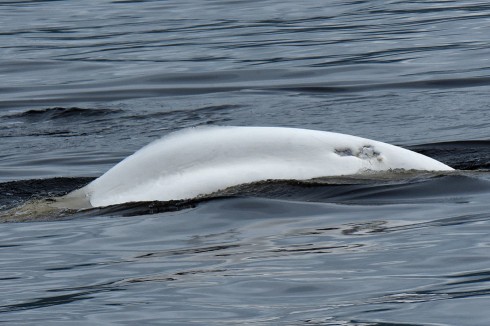 YOGI SWIMS UP THE SAGUENAY ALONE

This week, fog is prevalent. Our observations had to be cut short. Nevertheless, we managed to conduct three censuses and spent 12 hours with belugas. Here is one noteworthy story for the week.

Throughout the week, we observed Yogi twice, on August 13 and 14, swimming alone up the Saguenay along the cliffs. Yogi is a highly fertile female first observed in 1986. Unlike the majority of the females that we know, Yogi tends to avoid groups. This year the trend is even more pronounced, she is quite emaciated and spends a great deal of time on the surface! Belugas are far from being solitary animals. They live in pairs and groups of 3 to several dozen individuals or clans, governed according to sex- or age-based segregation. In summer, females even form large communities in which they care for newborns and young. These communities are associated with traditional territories.