GREMM » Uncategorized » With the Belugas: Week of July 13

With the Belugas: Week of July 13 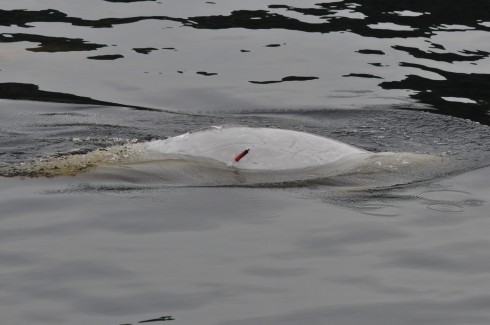 RESEARCHERS’ TIPS TO RECOGNIZE THEM

In the course of three days at sea, as part of our behavioural study project on St. Lawrence belugas, we logged 13 hours of observation. We began by exploring the mouth of the Saguenay Fjord as far upstream as Baie Sainte-Marguerite, followed by the Charlevoix sector between Cap du Basque (Baie-Sainte-Catherine) and Cap de la Tête au Chien (Saint-Siméon). On the south shore, we sailed to Île Verte, opposite Cacouna. Overall, visibility was excellent and cloud cover was low. The winds have stirred up strong waves, making navigation a bit more challenging throughout the day. Other than this day, the seas have been quite calm. We observed four herds, two of which comprised about ten adults and gray young, and the other two, larger, with a high proportion of grays and calves. Among them were two newborns that we had not even accounted for yet! Most of the time, the belugas were travelling, and were more or less dynamic.

Tuesday, July 14, 2015, 10:24 am: We are observing a calf within the herd. We can learn a number of things by observing newborns. Firstly, when a calf swims pressed against the side of another beluga, we can assume that it is the mother; and, if the alleged mother is observed repeatedly with a calf, we can conclude that it is a female. Secondly, if we know the female, we can conclude that she is fertile. By observing her year after year with her calves, we can compile a family album and understand her family ties with other belugas. In today’s observation, we have not specifically identified the calf’s mother.

Thursday, July 16, 2015: Around 10:03, we approach an adult accompanied by a young gray individual and a calf. They do not bear any specific markings, which would have made it easier for us to identify them. As adult belugas are white, the markings (scars, deformations, unique character or unusual shape) that they bear are what allow us to distinguish them. Out of an estimated population of 900 individuals, we are able to recognize about 350 using photo-identification. Within the same group, we also take biopsies of belugas that show a visible marking. As part of our study, we take this small piece of skin only from those animals that have identifiable markings. At Cap de la Tête au Chien, 150 m from the coast, we meet a group of eight whales, probably females, which appear to be moving, but are not. In fact, they are facing into the current and treading water. This behaviour is observed often in this sector. It is believed that this might be done to increase their manoeuvrability in order to capture prey.

Friday, July 17, 2015: We observe an individual showing well defined marks: a spot near its neck and a depression above. We are unable to identify it on the boat, but such distinctive characteristics make it a good candidate for a match. We always send photos of the belugas we’ve encountered to our research technicians in the lab. One of them was able to identify our beluga: it is DL0249, an individual that we last observed in 1998, 17 years ago! This beluga probably went unnoticed by us because even if the spot is always apparent, the depression above is not. Further, when we photograph belugas, it is quite difficult to capture this part of their body. A challenging photo-ID!

In short, some of the stars observed this week include Céline, Miss Frontenac, DL0030, Blanche, DL1944, Géographis, Annakpok and DL2023.