GREMM » Uncategorized » With the Belugas: Week of July 27

With the Belugas: Week of July 27 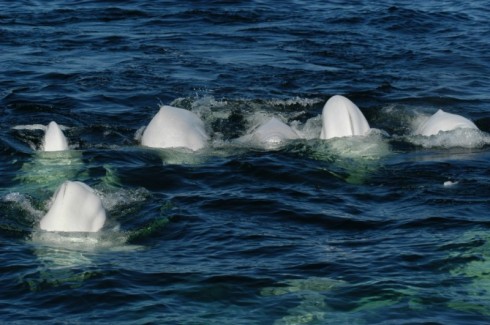 It’s been a tough week for working out at sea. However, we have completed three surveys and logged over 20 hours at sea, including 11 spent with belugas: many wonderful encounters and a few frustrations. Here are a few excerpts!

Tuesday, July 28, 2015: We can already hear thunder, the waves are high and the weather forecast is calling for more storms to come. It’s a real challenge to find and track belugas in such conditions. Yet this is the reality of field work; we seek out every possible opportunity to be at sea with belugas… the season is passing by quickly! After an initial contact in choppy waters downstream from Île Rouge, we find a calmer area south of the island: a herd of adults and young is here. A female accompanied by a newborn attracts our attention and convinces us to pursue this new contact. Particular attention is paid to mother-young pairs. Before we can conclude that the newborn is indeed accompanied by its mother, we need to continue observing for a while. In fact, sometimes, a mother leaves her little one for a few moments, at which point it might be accompanied by another adult or even occasionally by a young beluga. However, the weather conditions prevent us from completing this observation. Fog closes in on the boat. We leave somewhat frustrated, but with images of a mother-young duo…to be confirmed.

Some of the whales identified this week include:

Blanche – adopted in 2014 by the municipality of Tadoussac;

DL0030 – available for adoption by participants of a collective adoption;

Aquabelle – adopted in 2014 by the Aquarium du Québec;