GREMM » Uncategorized » With the Belugas: Week of July 6

With the Belugas: Week of July 6 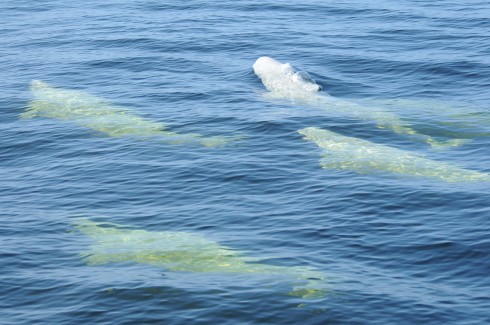 Our second week in the field for the beluga behavioural study was spread over three non-consecutive days (July 6, 9 and 10), for a total of 20 h at sea and 11 h of beluga observation.
The weather was rather favourable: few clouds, light winds, little rain. In short, good visibility and smooth, wave-free waters.

We first toured the upstream sectors, on the south shore of the St. Lawrence Estuary, around Île aux Pommes near Trois-Pistoles and Kamouraska. We encountered several females with juveniles as well as groups of “adolescents”, with a high percentage of “grays” and calves (newborns).

Downstream, we sailed off of Pointe Sauvage, near Les Bergeronnes. We observed groups of adults and groups of “dirty whites”, i.e. young adults, presumably males in this case. In most observations, herds were stationary but highly active. They were repeatedly diving and surfacing at the same place, a behaviour known as “milling”. Also, we had the chance to hear them vocalize and observe them spitting water. This spitting behaviour can be explained by their “sucker”-type diet. When they suck up their prey at the surface, water is spat out. The purpose of this could also be to frighten their prey. Belugas are gregarious and highly social animals. They communicate with one other with different sounds and different frequencies, some of which are perceptible to the human ear. Finally, in the course of our three forays offshore, a total of 6 herds of 15-60 belugas were observed, as were groups of gray seals and harbour seals, minke whales, porpoises and common eiders, a common sea duck in the region.

We had a guest on board this week, Antoine Simond, who is conducting a research project with Mériscope as part of his Ph.D. He collected tissue samples (biopsies) for analysis for a study of emerging contaminants (flame retardants) and their effects on minke whales and belugas.

Monday, July 6, 9:25 am:
Off of Trois-Pistoles, we made initial contact with a particularly “adolescent” herd of males and females comprising about 60 “gray” individuals. During the summer, adult males and females practise a sort of segregation. Upstream sectors are mainly frequented by groups of females, and downstream sectors by herds of males. The Saguenay area is frequented by both sexes, and mixed herds can sometimes be observed. Males form stable networks from year to year, while females form rather temporary coalitions for the season. This mixed herd of young seemed to have not yet chosen a particular sector.

Thursday, July 9, 1:00 pm: off Cacouna, we observe a female exhibiting an unusual behaviour.
We approach and find that this female is maintaining her dead calf afloat on the water surface. We had already observed this particular and mysterious behaviour in St. Lawrence belugas, but its function remains unknown. Thanks to our hydrophone, we were able to record the female’s vocalizations.

Friday, July 10: A successful day for biopsies, i.e. skin samples that enable us among other things to determine the animal’s sex and its family lineage.
This technique, performed using a crossbow, requires tremendous agility, as the shooter needs to take aim at the target in sometimes stormy sea conditions. With practice, we can achieve a success rate of 80%, but as opportunities to sample are not common, every biopsy is valuable.

In short, some of the stars observed this week include Douxi, Bonheur and DL0281.

The Bleuvet is a boat belonging to the GREMM. It is dedicated to the long-term research program on St. Lawrence belugas.