GREMM » Uncategorized » Miss Frontenac is Back with her Young!

Miss Frontenac is Back with her Young! 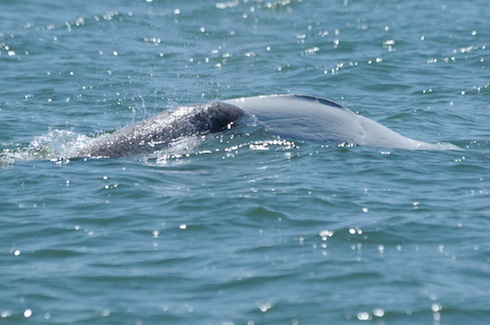 The Bleuvet crew is back on the water… and they’re off to a great start! This first day offshore held a nice surprise for us. Miss Frontenac has returned with her young.
After arriving near Île du Chafaud aux Basques, along the Batture aux Alouettes, we initiate a “contact” – this is how we refer to our tracking sessions – with a herd of females with young. The kick-off of the field season is always an exciting time. Whom will we encounter? And above all, will the female belugas who gave birth last summer be back with their year-old young? For wild animals, birth and the first year of life are the most critical times of their lives.

Miss Frontenac gave birth to her first calf in the summer of 2014 and we were eager for her to return. In fact, Miss Frontenac is a very special beluga for our team. Born in 2004, she bore a major scar on her back from the time she was just a few weeks old. She thus became the first photo-ID’d and recognizable beluga from her very first year of life. We have observed her every summer since. And it was at the age of ten that she gave birth to her first calf. We are already looking forward to seeing them again!
Miss Frontenac was adopted in 2008 by Fairmont Le Château Frontenac.

The Bleuvet is a boat belonging to the GREMM. It is dedicated to the long-term research program on St. Lawrence belugas.