GREMM » No category » What do Belugas Teach Us about the St. Lawrence and about Ourselves? (7/8)

What do Belugas Teach Us about the St. Lawrence and about Ourselves? (7/8) 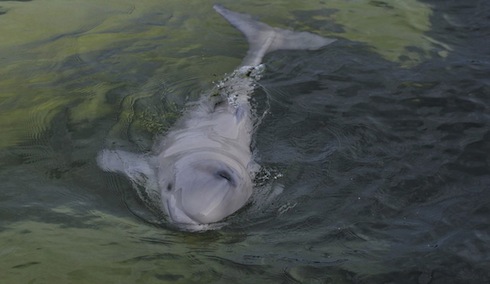 Beluga stories: this is the seventh episode of the transcript of the training lecture given by Robert Michaud at the CIMM on June 22, 2015. In this text and audio episode: the biologist answers questions from the audience who wishes to know more about newborn beluga mortalities.

On June 22, Robert Michaud, scientific director and co-founder of the Group for Research and Education on Marine Mammals (GREMM), gave a training lecture at the Marine Mammal Interpretation Centre (CIMM) in Tadoussac. The biologist and St. Lawrence beluga specialist shared stories about these whales and raised questions about the current decline in the St. Lawrence population. Whales Online brings you excerpts of this presentation, in the form of a sort of written and audio series to be followed all summer and fall.

With regard to newborn belugas found alive on the river banks, do we have a theory that might explain their strandings? Are the young being plagued by some problem? Could the mothers be suffering from dystocia (calving difficulties)?
Listen (1 min 28 s) (in French)

Nadia Ménard, ecologist and team leader for the Saguenay–St. Lawrence Marine Park, adds some food for thought, especially concerning the role of new contaminants in the St. Lawrence (PBDE, chemicals used in the manufacture of fire retardants). The 2008 red tide is also mentioned. In conclusion, is some specific situation responsible for these deaths, or is it a combination of factors?
Listen (2 min 40 s) (in French)

Did the food resources available to females play a role in the newborn mortalities? Herring – a top quality resource for belugas – is discussed. And what role was played by the presence or absence of sea ice in the Gulf of St. Lawrence during the winter?
Listen (4 min 12 s) (in French)

Does the peak of newborn mortalities correspond to a peak in births? Do we know the survival rate of newborns?
Listen (3 min 26 s) (in French)

On Whales Online:
Is the accumulation of flame retardants in St. Lawrence belugas cause for concern?

Marine Mammals Emergencies mobilized following red tide (archives of News from Near and Afar, 2008) (in French)