GREMM » No category » What do Belugas Teach Us about the St. Lawrence and about Ourselves? (6/8)

What do Belugas Teach Us about the St. Lawrence and about Ourselves? (6/8) 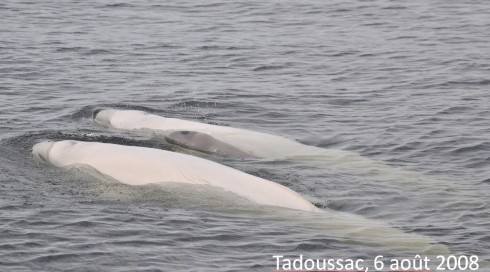 Beluga stories: this is the sixth episode of the transcript of the training lecture given by Robert Michaud at the CIMM on June 22, 2015. In this text and audio episode: beluga fishing of yesteryear with weirs and the film Of Whales, the Moon and Men; the birth of a beluga in captivity and its mother’s behaviour; lending nature a hand by attempting to reintroduce a baby beluga found on shore into a group.

On June 22, Robert Michaud, scientific director and co-founder of the Group for Research and Education on Marine Mammals (GREMM), gave a training lecture at the Marine Mammal Interpretation Centre (CIMM) in Tadoussac. The biologist and St. Lawrence beluga specialist shared stories about these whales and raised questions about the current decline in the St. Lawrence population.

Whales Online brings you excerpts of this presentation, in the form of a sort of written and audio series to be followed all summer and fall. In the final episode (8/8) of News from Near and Afar, Robert Michaud will answer additional questions. What about you, do you have any questions regarding belugas? We urge you to ask them in the “Questions from the Public” section of the website or on the Whales Online Facebook page.

Robert Michaud speaks about the film Of Whales, the Moon and Men, produced by Pierre Perreault and Michel Brault in 1962. At the time, belugas were referred to as “porpoises”. For this film, residents of Île aux Coudres revive traditional “porpoise” fishing using weirs, a practice that disappeared in the 1920s. For what purpose?

In June 2008, a beluga at the Vancouver Aquarium gave birth. The behaviour of this young mother raises many questions. And now, two months later, a baby beluga whale is stranded alive on the north shore of the St. Lawrence Estuary. It was decided to place it back into the water in the hope that it would be adopted by a group of belugas. The monitoring of this attempt yields exceptional observations. But once again, this type of incident raises ethical questions, especially when it is an endangered species: should we let nature follow its course or should we intervene?

Of Whales, the Moon and Men (downloadable film)

Qila gives birth in 2010 in the Vancouver Aquarium

Whaling in the St. Lawrence

Previous episodes of the training lecture: