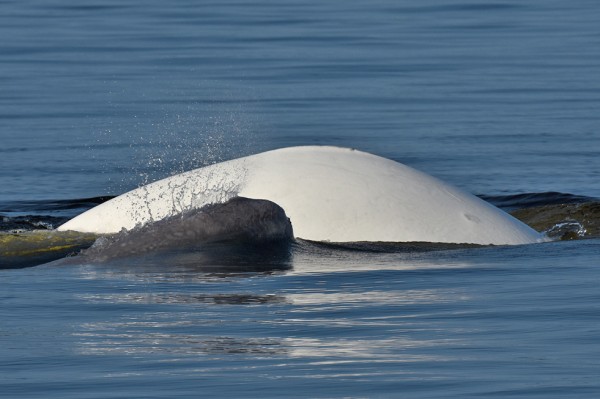 MOM, CAN YOU HEAR ME?

This week, the team had 11 encounters in 22 hours with belugas. Two boats were on the water to continue the photo-identification. On board one of them were Robert Michaud and Valeria Vergara, who were undertaking a passive acoustic protocol on the sounds of newborn belugas. GREMM founder Robert Michaud speaks about this new project.

This week: “We are working again with a longtime collaborator and we are relaunching a project that is particularly dear to us. During my stay as resident researcher at the Vancouver Aquarium in 2007-2008, I discovered the work of Valeria Vergara who was studying communication development in beluga newborns. Valeria notably used the recordings we had made in the St. Lawrence to demonstrate the alert function of the first cries learned by young belugas. This week, we are working together in the Saguenay Fjord to assess the possibility of studying the impact of noise on communication between mothers and their calves. In the first few weeks of life, the calves’ “contact” cries are emitted at relatively low frequencies that are easily masked by the sound of boats. This is a challenging project, but an important one. We managed several very good recordings this week… The pilot project is conclusive. Funding remains to be secured to ensure the kick-off of the project next summer. At the present time, we believe that we will need two or three seasons to conduct this new study.”