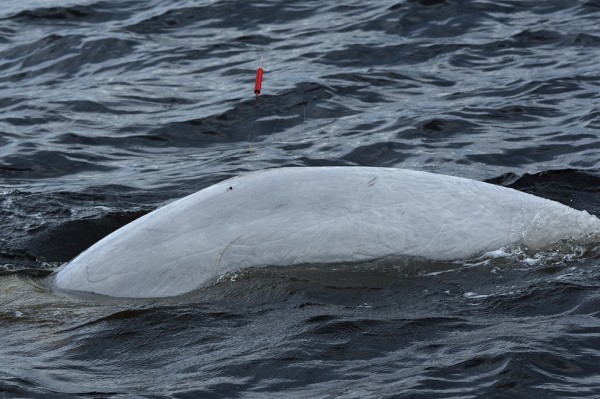 Biopsies Made Challenging by the Wind

In this second week of the intensive beluga biopsy program, we have spent 16 hours with these animals. Autumn can be felt in the air: daylight hours are shorter and it is biting cold on the water! Strong southwest winds prevent us from working in the Estuary much of the week and force us to take refuge in the Saguenay Fjord, but on the morning of September 18, conditions are better. Here is a summary of this day.
It is early morning. We decide to try our luck in the Estuary and venture beyond Batture aux Alouettes in Baie-Sainte-Catherine. The conditions are not encouraging, but we try. In addition to the waves, fog limits our visibility, but we look for belugas, we seek … and we find. They are 100 m away from us and we can barely make them out. There are about thirty animals in two tight, dynamic groups.
At 9:22, 20 minutes after the start of the contact, we fire a first shot… missed! The wind has already picked up and changes the trajectory of the bolt. We reload and approach another group. At 9:34, we fire a second time! This time, the biopsy is successful. Everyone on board gets back into their positions. There’s no time to lose: the animals are in tight, directional groups, which is ideal for this kind of work and should be taken advantage of. Another group emerges next to us, everyone is ready, the belugas are a good distance away, another shot! It is 9:36 and here we are now with two successful biopsies in the span of two minutes. Our luck ends there, however: the wind grows stronger and makes us miss the following two shots. We stop the contact with two biopsies under our belt, which isn’t too bad and then, once again, we return to the Saguenay Fjord!

Click on the map to navigate with the Bleuvet and discover the highlights of the week! Although this map is only available in French, the image it illustrates goes beyond language.