GREMM » Uncategorized » With the Belugas: Week of August 3

With the Belugas: Week of August 3 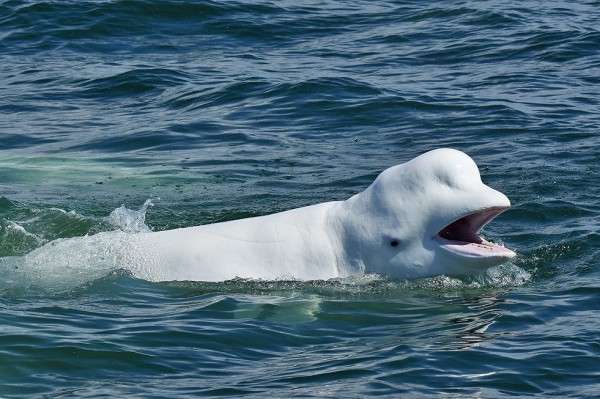 A BELUGA THAT SHOWS ITS TEETH

Several hours at sea for Week 6 in the field! In total: 20 hours with belugas and 5 censuses. We encountered a number of herds, each of which numbered about fifty individuals. The following is an encounter with an individual exhibiting remarkable behaviour!

Friday, August 7, 2015: this happened at the end of an encounter with a herd of young adults. There are about 80 animals, split up into no less than nine groups. It’s late morning, and we’re near Île aux Pommes off of Trois-Pistoles. It’s an ideal day with perfect visibility and hardly any waves. Despite the active behaviour of the animals (they are swimming in circles and vocalizing at the water surface), which complicates the task of photo taking, we manage to snap a number of pictures of animals with marks allowing for identification. Just before leaving, a large male approaches us, sticks his head out of the water and chatters his teeth several times! We are taken aback by this most extraordinary behaviour! Why does he do it? That remains a mystery…

THE WHALES IDENTIFIED THIS WEEK

Blanche – adopted in 2014 by the municipality of Tadoussac

Jetstream – adopted in 2002 by The Fairmount Vancouver Airport