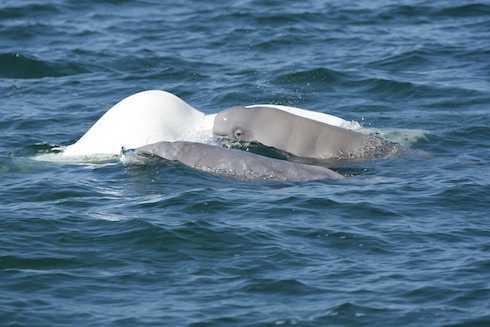 One, two, three…four newborns are surrounding us!

In 18 hours with belugas this week, we conducted four censuses and encountered several herds of females with young and newborns. Here’s one of the highlights!

Afternoon of September 4, 2015: we are with a herd of about 25 belugas on the other side of Île aux Lièvres. The animals are constantly changing direction, swimming in circles and the group compositions are changing every time they surface. We struggle to follow them, but we nevertheless manage to observe a first calf. A few seconds later, a second calf appears 100 m behind the first one. The animals dive. Four minutes later, a large group returns to the surface, the animals are quite close to one another and among them, a third newborn! At the end of the breathing sequence, the group quietly disperses and departs in small groups. And we’re still counting: almost simultaneously, four mother-calf pairs surface, each one some forty metres from the next. This is one of the largest concentrations of calves observed this summer. Although we remain concerned after another year of high mortality of newborn belugas, observations such as these are very encouraging.